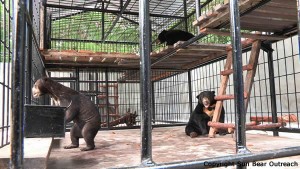 In 2014, Sun bear Outreach, in collaboration with the Orangutan Foundation International (OFI) made its first large forest enclosure of about 1 hectare in size on OFI land at the Care Centre in Pasir Panjang, Central Kalimantan, Indonesia.

The enclosure was made for 3 adult sun bears: Desi, Kevin and Hilda who had been kept in individual cages at OFI and who could not be brought back to the wild. The objective was to put the 3 bears together and give them access to some of their natural habitat, allowing them the opportunity to feel the soft forest ground under their feet, to dig, run, climb trees and be outdoors.
Unfortunately, during the construction of the enclosure, Kevin, the big strong male bear of the group, died on May 11th 2014 from an acute necrotic pancreatitis. He was gone in less than 24 hours from showing the first clinical symptoms, there was nothing we could do. Poor Kevin never got to enjoy a bit of forest and some space.

The enclosure was ready on August 20th. The following morning, the “bear doors” leading to it were opened, but neither Desi nor Hilda dared to enter. It was not before 4 pm that Desi went in. She hung around in the open area by the pool for about 10 minutes then disappeared into the forest and did not come back to the cage for 36 hours. When she did come back she was hungry and tired but happy. 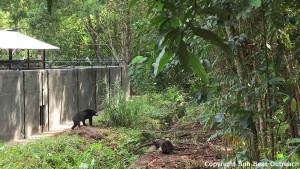 Hilda eventually followed Desi into the enclosure and they both loved it. Having the possibility to go outside and spend time in the forest changed their lives and they became much more relaxed and at peace than they had been before. In their old cage they spent a lot time pacing back and forth like most sun bears do when locked in a small space, but now the only time they pace is when they are  hungry and impatient to be fed.

Bonnie, a new male bear, arrived at the OFI Care Centre in June 2014. He was about 3 years old and was very gentle. But he had been kept in a small cage all his life and was very insecure. He underwent a vasectomy and was introduced to the girls Desi and Hilda. The three bears became friends right away. 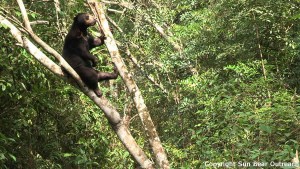 At Sun Bear Outreach we believe that making forested enclosures for adult captive sun bears is, without a doubt, the best thing we can do to significantly improve their quality 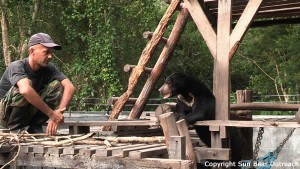 of life. This enclosure for Desi, Hilda and Kevin (then Bonnie) was our first project and proved a great success.

Please watch the video on this project