In Indonesia, sun bears are threatened by deforestation and are hunted for their meat, their hide, their paws and their bile used in Chinese medicine. The cubs are captured alive to be sold on the wildlife pet trade and usually end up locked up for life in a small cage of some private owner. Unfortunately, those few bears who are lucky enough to be rescued by a wildlife rescue centre, are often also locked up for life in a cage because the rescue centres don’t have the means to provide them with a better place. The first mission of Sun Bear Outreach is to give these captive sun bears descent and respectable living conditions. While doing so, we also raise awareness on animal welfare, the plight of the sun bears and deforestation.

Sun Bear Outreach is a non-profit charity registered in France and founded in 2014 by Patrick Rouxel. Since 2014, we have collaborated with wildlife rescue centres in Indonesia that have sun bears in their care. We build large forest enclosures for the bears, we renovate and improve the existing facilities and we train the local staff to animal welfare and the needs of the sun bears. To this date, we have helped improve the living conditions of about 100 sun bears across Indonesia. Some bears have gone from living alone in less than 2 square metres, to living with other bears in several thousand square metres of forest. 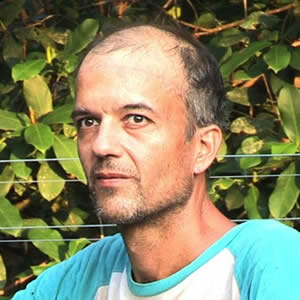 Born in 1966, I am half Swedish, half French and grew up in Malaysia and Singapore. I graduated with a BA in Humanities from UC Berkeley in 1987 and went on to study literature at La Sorbonne in Paris. After working for more then 15 years in digital special effects for feature films, I decided to go freelance as a filmmaker for environmental conservation. From 2004 to 2014, I made films dedicated to the protection of the tropical rainforest and to animal welfare.(www.patrickrouxel.com)

In 2011, a chance encounter with an orphan sun bear cub in Indonesia changed the course of my life. As told in my film “Life is One”, I chose to rehabilitate this cub to the wild, followed by another two cubs, and in the process I discovered what it is to be a sun bear. The 3 years I spent in the forest with the cubs opened my eyes to the joy the bears experience at being free in their habitat, and in retrospect, to the suffering they endure when confined behind bars. This triggered my commitment to improve the welfare of captive sun bears in Indonesia.

I live in France where I graduated from the Ecole Polytechnique as an engineer and after 20 years of a professional career in corporates, I became a psychotherapist. I now work with people in pain to help them find a well being.

It is very important to me to do whatever we can to protect life in all its manifestations: humans, animals, trees, the environment, and oceans.  This is why I am vegetarian, why I try to minimize my environmental footprint and why I am active in different non profit organizations that focus on these issues.

Having seen through Patrick’s films the dreadful conditions in which sun bears are held captive, it seems essential to me to raise awareness about the plight of these bears and to improve their living conditions whenever this is possible. I am very proud and honoured to be able to participate alongside Patrick to this cause through Sun Bear Outreach.

Born in 1964, I am half Swedish, half French and grew up in Malaysia and Singapore. I graduated with a BS in Boston USA and worked for 10 years in Japan and France in Industry. I am now a potter in the south of France. Ceramics started off as a hobby and it soon turned into a passion. So one day I decided to turn this passion into a career. I have been working for 15 years in the creation of functional ware. As a lover of nature and animals, I am happy to be an active member of my brother’s non profit: Sun Bear Outreach.

Living in France, my husband and I educate our child with the notion that he is part of a planet where every life form has a place and deserves respect and preservation. In this world of consumerism, we try to our best to teach him how to value things as precious objects made from materials given to us by nature.

Aware of the destructive impact of man on our precious planet, I am happy to contribute to its preservation by helping out in my brother’s non profit: Sun Bear Outreach.