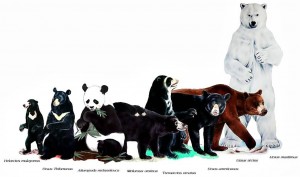 The sun bear is the little one far left

Sun bears are the smallest, most arboreal and least studied bears in the world. Their estimated population size is unknown. Their name comes from the pale golden horseshoe patch on their chests, which is said to resemble the setting or rising sun. Like a thumbprint, no two markings are the same.

They have a very long tongue of 20 to 25cm. This helps them extract honey from bee hives, earning them the alternative name ‘honey bear’ or ‘beruang madu’ in Malay and Indonesian.

Sun bears live in tropical lowland forests. They are found essentially on the Island of Borneo and Sumatra (Indonesia) but also in Malaysia, Thailand, Laos, Cambodia, Vietnam, Burma, Bangladesh, North-Eastern India and South China.  They are mainly diurnal and do not hibernate but build nests in trees to sleep in. They are omnivores and primarily eat invertebrates, fruit and honey. 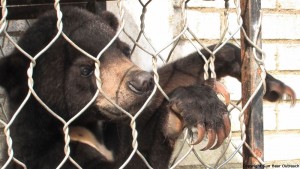 The total sun bear population has declined by at least 30% in the last 30 years contributing to sun bears being classified as ‘vulnerable’ in 2007 meaning they are at high risk of extinction in the wild. Sun bears face three main threats: