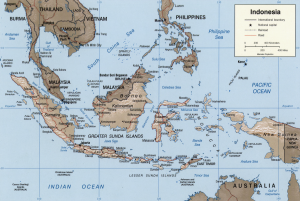 The Republic of Indonesia consists of five large islands and 13,677 smaller islands forming an arc between Asia and Australia. It extends 5,271 km East to West and 2,210 km North to South. The five principal islands are Sumatra, Java, Borneo (Kalimantan), Sulawesi and New Guinea (Irian Jaya).

Indonesia supports the world’s second highest level of biodiversity after Brazil. But it also has the highest rate of deforestation in the world, releasing Brazil from its former title, according to a report published in the Nature Climate Change journal in 2014. Led by researchers at the University of Maryland, the study found that the Indonesia lost over 6 million hectares of forest between 2000 and 2012. Despite government attempts to ban logging nationwide, the deforestation rate has increased in recent years. During the final year of the study, in 2012, Indonesia lost a whopping 840,000 hectares of forest while Brazil “only” lost 460,000 hectares. Indonesia’s deforestation is driven in large part by its population and industrial growth, namely that of the palm oil industry, which has cleared over 8 million hectares of forest so far. 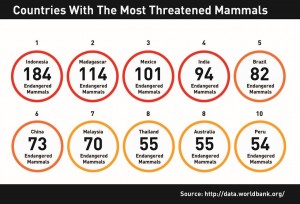 With the highest rate of deforestation in the world, Indonesia also has the highest number of mammals threatened with extinction, 184 according to IUCN. Despite only occupying 1% of the Earth’s land mass, Indonesia’s rainforests are home to 12% of mammal species in the world, but deforestation has put many of these at risk, including orangutans and critically endangered Sumatran tigers and rhinos, not to mention the sun bears!