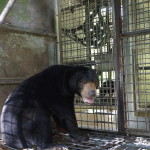 Maria arrived at Samboja Lestari in East Kalimantan, Borneo in 2008 with her male partner called Fahri. They were both originally from Sumatra and had spent some years in a rescue centre in Sulawesi. At Samboja they were kept in separate cages by fear of reproduction, so one of the first things I did when I arrived at Samboja in 2015 was to have Fahri undergo a vasectomy and put him back with Maria. I also had a new cage built for them. 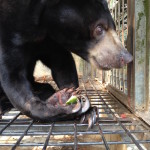 Maria and Fahri were happy to be reunited and my next mission was to build a large forest enclosure for them. Unfortunately Fahri died in January 2017 of a kidney failure before the enclosure was finished. Poor Fahri never got a chance to play in the forest with his girlfriend Maria. 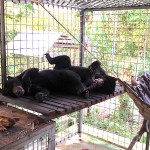 Finding a new friend for Maria proved to be very difficult. We tried with at least 10 different bears but it never worked out. Either Maria was afraid of them or they were afraid of her, until Roni came along. Roni arrived at Samboja Lestari in September 2019 from Nyaru Menteng, the other BOS refuge in Central Kalimantan. Roni is still a young male, perhaps 4 to 5 years old, but unlike most sun bear males he is very gentle with females. Perhaps this is why Maria likes him. In Nyaru Menteng, Roni used to share a cage with a female who just avoided him, but with Maria that is not the case anymore and they spend a lot of time playing together, as if catching up for lost time.