We are still working on the construction of Enclosure E at the sun bear sanctuary of BOSF in East Kalimantan. The rains and the difficulty of bringing the supplies to the construction site have considerably slowed the progress but we hope to finish this new 0,7 hectare forest enclosure before May 15th. 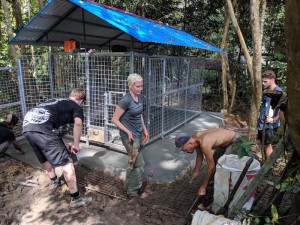 In the mean time, we did a small outdoor enclosure for an old bear called Giono. This bear has difficulties coordinating his movements due to neurological problems. He moves around very slowly and he can’t climb, so we built an enclosure especially for him. It is about 150 m2 in size with an attached den where Giono can shelter from rain and sun.

We moved Giono to his new home on the 28th April. The door between the den and the outdoor enclosure is left open so that he can chose to go wherever he pleases. He seems happy to feel the forest floor under his feet and is moving around sniffing the forest and digging in cool shaded places where he can rest. 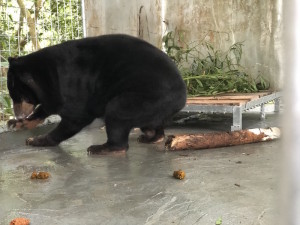 Giono in his new den 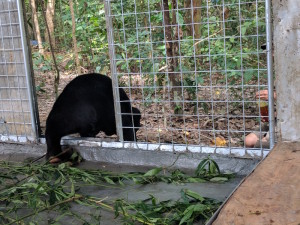 Gino going out into the enclosure

I would like to personally thank all the volunteers who have helped build this new den and enclosure as well as the people who have donated funds to Sun Bear Outreach enabling us to buy the material needed for the construction. 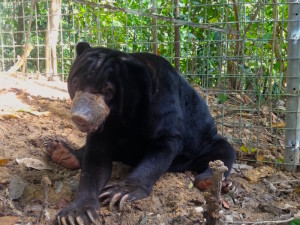 Giono in his new enclosure