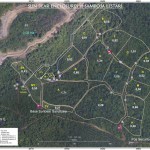 Construction of the 15 forest enclosures (A to O) is going well at Samboja Lestari, the rescue centre of Borneo Orangutan Survival Foundation (BOSF). They are all done except for one, Enclosure J, which we are now working on. 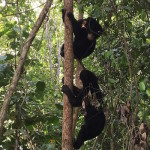 We recently moved a group of 7 juvenile bears in Enclosure A, of 1,7 hectares (about 4 acres) in size. These 7 buddies all come from different backgrounds: Deni and India had arrived as cubs at Samboja and were taken out for walks in the forest for the first 6 months, then they had to be kept in a cage when they became unmanageable outdoors. So they are very happy to be able to go out again. Some, like Berung, Asri, Borela and Tapir, have probably never been out in the forest before and this is a big learning experience for them, putting to the test their ability to climb trees. 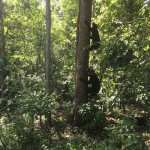 The last one, Bernard, just arrived a few weeks ago at the rescue centre. He was probably kept all of his life in a tiny cage and his skeleton hasn’t developed properly, he walks with difficulty. For him, going out in the forest has been a huge event: he discovered his love for digging! He digs for the pleasure of digging. 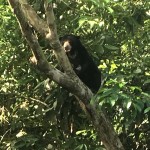 After letting all the bears out on the first day, Bernard didn’t come back for 3 days, he was probably somewhere in the middle of the enclosure digging his way to the other side of the Earth. But he eventually got hungry and, on the fourth day, found his way back to the cage.